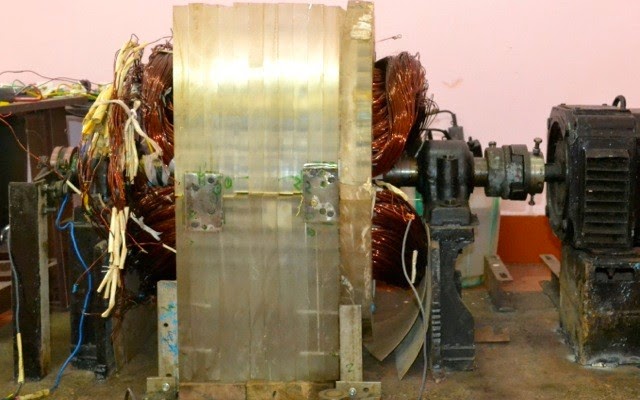 In much of the mainstream scientific world, electrical generators that produce any efficiency higher than unity have been ruled out due to the Law of Conservation of Energy (LCE), but things are changing, and so is science (as it always has). Over the past few decades various scientists – including Nobel Prize winning scientists – have demonstrated that there is an energy that exists in so called “empty space” (space is just a construct that gives us the illusion of separation).

Science has shown us that atoms aren’t sitting in a void, they’re in fact sitting in a sea of energy. Once physicists realized that this energy is there, the next question was whether it could be tapped, or used to develop new, clean green energy generators that run of off this energy. The answer is yes. Back in the 1980s a researcher at Hughes laboratory by the name of Robert Forward demonstrated a phenomenon dubbed the “casimir effect” which proved that, yes, this energy could indeed be tapped and possibly used to generate energy. (1)

“Vacuums generally are thought to be voids, but Hendrik Casimir believed these pockets of nothing do indeed contain fluctuations of electromagnetic waves. He suggested that two metal plates held apart in a vacuum could trap the waves, creating vacuum energy that could attract or repel the plates. As the boundaries of a region move, the variation in vacuum energy (zero-point energy) leads to the Casimir effect. Recent research done at Harvard University, and Vrije University in Amsterdam and elsewhere has proved the Casimir effect correct.” (2)

Below is a video of Paramahamsa Tewari and his Space Powered Generator. He was born on January 6, 1937, and graduated in Electrical Engineering in 1958 from Banaras Engineering College, India. He has held responsible positions in large engineering construction organizations, mostly in Nuclear Projects of the Department of Atomic Energy, India. He was also deputed abroad for a year at Douglas Point Nuclear Project, Canada. He retired in 1997 from his position as Executive Nuclear Director, Nuclear Power Corporation, Department of Atomic Energy, India, and is the former Project Director of the Kaiga Atomic Power Project.

You can visit his website here. Please keep in mind that his website is currently in the process of being completely revamped and updated.

It’s best to think of this technology as a box. You have something to kickstart it (battery) and then it is set in motion. You no longer need the battery to run it after it’s been started, and it runs forever. A portion of the energy output from the machine is recycled back into the machine for power generation.

The test results (Tewari’s machine) of input power to the drive motor and the output from the RLG are shown on the accompanying graph. The violet line shows the actual input to the RLG from the drive motor. The drive motor has an efficiency of 80%. The green line shows the input to RLG without taking motor efficiency into account. The blue line shows the output from the RLG. Even at the moderate speed of 1750 rpm, at which this test was conducted, the ratio of RLG output / RLG input is 160% (from the lowest to the highest lines). With extrapolation it can be shown that at 3000 rpm, the efficiency of the M-RLG set will reach 275%.

Explanation of this phenomenon comes from the principles of Tewari’s Space Vortex Theory, which can be read in detail here:

Tewari has also put together an amazing piece of work that outlines the spiritual foundations of this type of technology, you can read that in full here:

All perceptible matter comes from a primary substance, or tenuity beyond conception, filling all space, the akasha or luminiferous ether, which is acted upon by the life giving Prana or creative force, calling into existence, in never-ending cycles all things and phenomena. Ere many generations pass, our machinery will be driven by a power obtainable at any point in the universe. This idea is not novel…We find it in the delightful myth of Antheus, who derives power from the earth; we find it among subtle speculations of one of your splendid mathematicians…Throughout space there is energy. Is this energy static, or kinetic? If static our hopes are in vain; if kinetic – and this we know it is, for certain – then it is a mere question of time when men will succeed in attaching their machinery to the very wheel work of nature. – Nikola Tesla (source)

Again, these concepts have been proven and published in numerous peer-reviewed scientific journals. A paper published in the peer-reviewed Journal Foundations of Physics Letters, in August 2001, Volume 14, Issue 4 shows that the principles of general relativity can be used to explain the principles of the motionless electromagnetic generator (MEG)(3). This device takes electromagnetic energy from curved space-time and outputs about twenty times more energy than inputted. This paper (which is one of many) demonstrates that electromagnetic energy can be extracted from the vacuum and used to power working devices such as the MEG used in the experiment. The paper goes on to emphasize how these devices are reproducible and repeatable.

Harold E. Puthoff, an American Physicist and Ph.D. from Stanford University, and a researcher at the Institute for Advanced Studies at Austin, Texas published a paper in the peer-reviewed journal Physical Review A, atomic, molecular and optical physics titled “Gravity as a zero-point-fluctuation force (4). His paper proposed a suggestive model in which gravity is not a separately existing fundamental force, but is rather an induced effect associated with zero-point fluctuations of the vacuum, as illustrated by the Casimir force.

A paper titled “Extracting energy and heat from the vacuum,” by the same researchers, this time in conjunction with Daniel C. Cole, Ph.D. and Associate Professor at Boston University in the Department of Mechanical Engineering was published in the same journal listed in the previous source. (5)

Relatively recent proposals have been made in the literature for extracting energy and heat from electromagnetic zero-point radiation via the use of the Casimir force. The basic thermodynamics involved in these proposals is analyzed and clarified here, with the conclusion that yes, in principle, these proposals are correct.” (5)

A paper written by Theodor C. Loder, III, Professor Emeritus at the Institute for the Study of Earth, Oceans and Space at the University of New Hampshire outlines the importance of these concepts in his paper titled “Space and Terrestrial Transportation and Energy Technologies For The 21st Century.”

There is significant evidence that scientists since Tesla have known about this energy, but that its existence and potential use has been discouraged and indeed suppressed over the past half century or more.” (2) – Dr. Theodor C. Loder III (6)

At the same time, some would argue that there is no, and will be no suppression of clean energy technology. The important thing to remember is that this is real, and it always takes time for new technology of this magnitude to make its way into the marketplace.

These concepts have been proven in hundreds of laboratories all over the world, yet never see the light of day. If the new energy technologies were set free worldwide the change would be profound. It would affect everybody, it would be applicable everywhere. These technologies are absolutely the most important thing that have happened in the history of the world. – Dr. Brian O’Leary, Former NASA Astronaut and Princeton Physics Professor. (source)

Personally I find it really hard to fathom that in the midst of so many published papers, and people who have supposedly developed machines, that any of this could be doubted. Do you really think established scientists and engineers (with such prestigious scientific backgrounds) would spend their entire lives publishing papers, writing articles and building these machines if it was a complete hoax? Think about that for a second.

This is a new technology, a new physics, a complete new idea and way of understand the true nature our reality.

I can understand the frustration of skeptics, thinking that if this technology were real, why do we not see it out on the marketplace?

It wasn’t long before carriage makers were driving horseless carriages, or people who used railroads to cross the continent started using airlines. Coal replaced wood, oil replaced coal, and new clean green technology like Tewari’s generator will replace oil. We don’t really have a choice at this point, and everything takes time. According to historian Richard Dolan, the NSA, for example, was operating computers during the mid-1960s with a processing clock-speed of roughly 650 megahertz(MHZ). To put that in perspective, it took 35 years for personal computers in the consumer market to reach that speed.

“Efficiency always wins. There will be no suppression of machines with efficiency higher than those currently on the market.” – Toby Grotz, seen in the picture below next to Paramahamsa Tewari and the Space Powered Generator. (President, Wireless Engineering, visited India in 1993 and again in December of 1997 to perform an independent set of measurements of the Tewari RLG. Using calibrated high-accuracy instruments, traceable to the National Bureau of Standards, tests were conducted that confirm Tewari’s measurements. During a recent visit in November of 2011 he witnessed the phenomenon of the negation of Lenz’s Law observing what he termed an Infinite Gain Generator. He has corresponded with Mr. Tewari since 1984 and has visited Mr. Tewari at his laboratory four times. He has become a trusted friend and champion of the Space Powered Generator. Toby Grotz Paramahamsa Tewari) 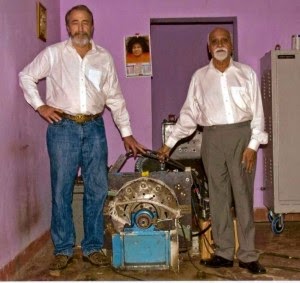 These things take time, and we must practice patience. Again, a newly developed, proven technology does not enter into the marketplace immediately after it has been discovered and developed, which is unfortunate. Do we even need a marketplace? All of this red tape? The whole setup of our current economic/ financial system is something that I feel needs drastic change. We can do much better than this, create something better, don’t you think?

I believe that this technology will come out when it is time for it to come out – which I feel is when the consciousness of the planet is ready to accept it. The implications of it go far beyond the technology itself, and deep into a new understanding about the true nature of our reality, and a spiritual foundation that co-exists together with modern day science to bring about a new era on planet earth.

Mr. Tesla thinks he can demonstrate mathematically that force and matter are reducible to potential energy. I am to go and see him next week to get this new mathematical demonstration. In that case the Vedantic cosmology will be placed on the surest of foundations. I am working a good deal now upon the cosmology and eschatology of the Vedanta. I clearly see their perfect union with modern science, and the elucidation of the one will be followed by that of the other. Swami Vivekananda (Complete Works, VOL. V, Fifth Edition, 1347, p. 77).

“Get over it, and accept the inarguable conclusion. The universe is immaterial-mental and spiritual.” – Richard Conn Henry, Professor of Physics and Astronomy at Johns Hopkins University

Below is a video I’ve used many times before featuring world renowned Physicist Harold E. Puthoff. He is an American physicist who earned his Ph.D. from Stanford University. He is the director of the Institute for Advanced Studies at Austin. You can learn more about him here.

« THE SECRET TO FUSION IS A LONG TUBE
Phinergy drives car by metal, air, and water »