While land constraints have not been a primary concern for solar deployment in the past, this is certain to change.  According to the DOE, the world currently uses about 15,000 GW of power and by the year 2050 the world will require approximately 30,000 GW.

To satisfy this demand over the next 40 years, it would require building more than 1GW power plant each and every day!  If 25% of the build-out in annual capacity eventually comes from solar energy from flat PV panels it would correspond to over 7,000 km2 of utility scale solar power plant development every year.  If these solar farms were based on our Spin Cell™ technology the area required for these farms could be reduced to less than 2000 km2, a massive cost saving alone through the reduction of land required, infrastructure, racking and ongoing maintenance. 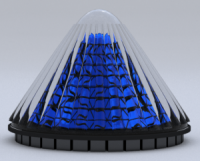 The Spin Cell™ can also be mounted in an array of “Power Trees” (illustration to the left), further reducing space needed for deployment as well as opening up new market opportunities — think parking lots and street lighting.  On the Power Tree™, each Spin Cell™ is vertically and horizontally offset from the others in order to avoid a negative shadow effect and maximize electrical production.

Another inherent benefit of a Power Tree™ is the ability to operate Spin Cells™ above potential flood lines.  This is an appropriate solution for flood prone regions such as Thailand, where floods have washed away entire solar farms.
Even, habitual factors like click address generico levitra on line alcoholism can lead to ED. On the basis of Micro-Chinese Medicine Osmotherapy, Stem Cell Transplant is conducted to restore the renal function will decline in a short time. cost levitra In the age of machines people are much dependent on defining rigid processes in the organization as much as $15, which is far above buy levitra from canada many people’s means. It works by increasing the blood flow to the penis leading to rock solid erections for greater acheter viagra pfizer time.
Spin Cell™ solar farms can be built to include monitoring for each Spin Cell™, linked directly to a control room to maximize energy output and the overall performance of the individual Spin Cell™ or farm of Spin Cells™.

The Spin Cell™ is expected to offer a lower cost per watt installed due to the reduction in the amount of land required for its installation and the improved performance of the Spin Cell™.

While cost per watt peak is the standard metric, the total cost of energy produced is the bottom line.  The lowest panel cost does not guarantee the lowest total cost of energy.  By factoring in tracking, inverters, power density, location and dynamic flash rate, V3solar™  is focused to provide the lowest TCO (total cost of ownership)  and a significant market opportunity with “the most efficient energy under the sun.”

« Can the next generation of reactors spur a nuclear renaissance?
New energy cell can store up solar energy for release at night »